Adrien Rabiot is not enjoying life at Paris Saint-Germain, especially after his manager, Thomas Tuchel, left him on the bench for his side’s crucial Champions League clash against Liverpool at home.

Friday’s edition of Catalan newspaper Mundo Deportivo mentions the Frenchman and his employer have been ‘fighting a cold war’ for several months and after the latest episode in the European competition, the tension between the two parties is ‘more than ever’.

His contract will expire in 2019 and he’s not yet signed an extension at Parc des Princes. It’s claimed that Barcelona are in ‘pole position’ to secure his services.

The 23-year-old’s desire is also to make a switch to Camp Nou, but the La Liga winners are aware there are other clubs looking at the option of signing the midfielder.

After the Ligue 1 winners’ latest victory over the Merseyside club, Tuchel told RMC Sport that Rabiot’s contract situation had nothing to do with the decision to drop him. 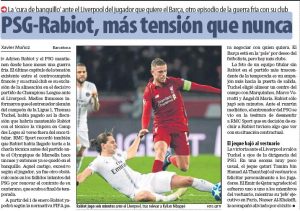 Either way, the tension surrounding the player at PSG will come as good news for Barcelona, who are looking to sign Rabiot on a free transfer after this season.