Rangers continued their reasonable success in Europe this season by drawing 0-0 against Villarreal on Thursday evening at Ibrox.

It means Steven Gerrard’s men still have a reasonable chance of qualifying for the next round and go into their last match against Rapid Wien with everything to play for.

Marca have a match report and explain how Rangers managed to stop the Spanish club from scoring.

Rangers weren’t helped by Daniel Candeias getting himself sent off, but that doesn’t mean there’s no praise for the Glasgow side.

The Spanish say ‘The Scots, like William Wallace, fought until the last breath’, although they don’t seem too impressed with Jon Flanagan, with the former Liverpool player being given a blank mark.

Everyone else got one or two stars, apart from the star of the show, who got three. 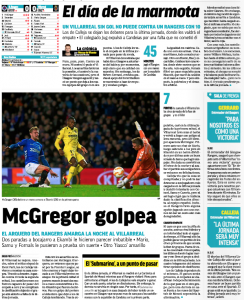 The man they were very much impressed with was Allan McGregor, with the 36 year old stopping anything which came at him.

Indeed, Marca are so impressed they’ve given the goalkeeper his own article.

Some of the saves from the Rangers stopper ‘made him look unbeatable’. Anything Villarreal tried, McGregor was ‘always there’.