Home Europe Everton, Swansea and Newcastle set to miss out on target, there’s a...
SHARE

It seems that none of Everton, Newcastle United or Swansea City will end up landing Seymon Doumbia from Sporting this summer.

Even though the three Premier League clubs have recently been linked to the striker, today’s edition of newspaper Record claims he should end up moving to Chinese football instead.

Sporting are pretty convinced to sell Doumbia at the end of the season, and will take their summer Chinese tour as a chance to try to close a deal.

The club have a few friendlies to play in the Asian country, and even though not all of the first team players will be featuring there, they are pretty sure that Doumbia must play these matches. 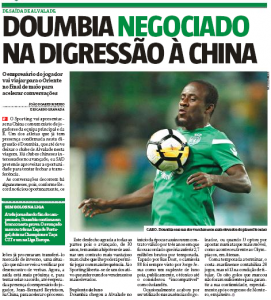 They expect the striker to impress so some club will bid for him. That’s why even his agent will be travelling to China as well.

That makes us wonder if Everton, Newcastle or Swansea were ever interested.

The Toffees and Magpies were linked in March by Jornal de Notícias, while contacts from the Welsh side were reported by Record, who now don’t even mention it.