Everton appointed Marcel Brands as their director of football in May 2018 and months later the Dutchman signed Lucas Digne for the Toffees.

The left-back arrived at Goodison Park from Barcelona and has regularly impressed for the Merseyside club, managing 17 assists in the league since the start of the 2018/19 season.

Digne’s fine displays convinced Carlo Ancelotti’s side to hand him a new contract last week and his latest deal runs until June 2025.

The France international’s performance for Everton is highlighted on the last page of today’s Mundo Deportivo and it’s titled ‘Lucas Digne is already the most dangerous fullback in Europe’.

Digne was the second choice left-back at the Camp Nou, behind Jordi Alba, and journalist Xavier Bosch explains the La Liga side made a profit of €4m after selling the defender to Everton for €20m.

Bosch further states: ‘On the same day of his renewal, it was made public that he was the left-footed fullback who created the most danger in the top five European leagues in the last three years. 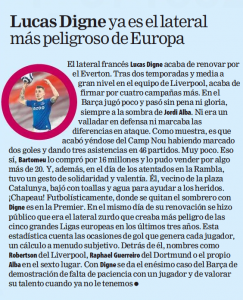 ‘This statistic counts the scoring chances each player generates, an often-subjective calculation. Behind him, are names like Robertson from Liverpool, Raphael Guerreiro from Dortmund or Alba himself in sixth place.’

The Mundo Deportivo journalist hints Barcelona regret selling their former player to Everton and uses Digne as an example to highlight the Catalan club ‘showing lack of patience with a player and valuing his talent when we no longer have him’.