On deadline day of the winter market, Celtic’s Olivier Ntcham joined Marseille on a loan deal until the end of this season.

The Hoops owned player’s move to France last month created controversy after André Villas-Boas made it public he wasn’t in favour of the midfielder’s arrival.

Villas-Boas’ comments forced the club to show him the exit door and they’ve now appointed Jorge Sampaoli as his successor. Nasser Larguet was the interim manager before the Argentine’s arrival was confirmed.

L’Equipe on Tuesday explain the former Chelsea manager’s departure at ‘first glance’ was ‘not bad news’ for Ntcham. However, things haven’t been going well for the 25-year-old so far.

After completing self-quarantine for seven days, the Celtic man made his debut when he came off the bench against AJ Auxerre in the Coupe de France clash. Since then, he has been limited to only 27 minutes on the pitch and has ‘disappeared’.

Ntcham is a signing undertaken by Marseille president Pablo Longoria and the latter’s relationship with Larguet has been ‘strained in recent months’. 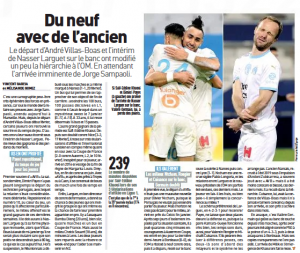 It’s not clear whether the Celtic midfielder will ‘pay the price’ for the internal conflict at Marseille.

Ntcham will hope things will improve for him now that Sampaoli has been appointed as Marseille’s new permanent manager, otherwise he’ll be back at Celtic relatively quickly.