More than a month ago, Mundo Deportivo reported Barcelona ‘know’ Arsenal and Paris Saint-Germain are their ‘rivals’ in the chase for Eric García.

It was also explained Mikel Arteta ‘wants’ the defender, who has less than four months left on his contract at Manchester City.

In his pre-match press conference on Monday, Pep Guardiola admitted the defender will return to Barcelona later in the summer.

The City manager’s comments are relayed in today’s Mundo Deportivo and the newspaper also takes a look at the Gunners and PSG interest in the Spain international.

The current Arsenal manager knows the centre-back very well from his time at City, where he worked as Guardiola’s assistant.

Mundo explain that García ‘only thinks’ of Barcelona despite ‘arousing’ interest from Arsenal and the Ligue 1 side. 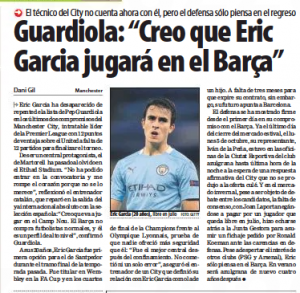 Having failed to complete a move to the Camp Nou in the last two windows, the City player has been firm on his commitment to joining the La Liga side.

In other words, Arsenal’s efforts to sign García will not yield any results because the 20-year-old is only focused on signing for Barcelona.