Home Europe Everton ‘in a hurry’ to get deal over the line – Blues...
SHARE

Everton are in a rush to complete their protracted move for Napoli midfielder Allan and are edging closer to an agreement with the Serie A club.

That’s what Il Mattino report today, stating that the Blues need ‘a few more hours’ to finalise the last parts of the negotiations for the Brazilian midfielder.

Everton, as you’ll be aware by now, have been chasing Allan’s signature since January, with Carlo Ancelotti having identified him as an ideal signing to improve his midfield.

Negotiations between themselves and Napoli have rumbled on for months over the asking fee as the two sides started far apart in their valuation of the 29-year-old.

They have steadily moved closer throughout the last fortnight, with reports from several newspapers indicating that there was only a small gap to be made up before Allan could head to Goodison Park.

That was as little as €2m as of yesterday, and Il Mattino now report a deal will be closed at around €34m.

This, though, includes a ‘series of bonuses’ linked to the Everton eventually being in the Champions League and that is why negotiations have been stuck.

The newspaper explains that because the competition is ‘not exactly within reach’ for the Toffees – given they finished 12th and 17 points outside the top four last season – it remained a point of contention for Napoli and caused the negotiations to drag. 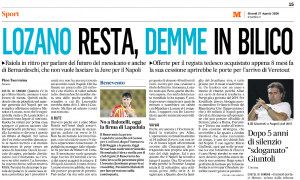 Everton, though, are now ‘in a hurry’ to get the deal over the line with the Premier League returning on September 12th.

Allan, for his part, is fully ready to make the switch and it’s explained that in Quarto, where he lives with his family, ‘everything is ready’ for the transfer.

That suggests he thinks it’s close, which is very much the tone Il Mattino are going with as well.