Home Europe Everton ‘matter of days’ away from completing deal – €2m away from...
SHARE

Napoli midfielder Allan is a ‘matter of days’ away from joining Everton, with just €2m now separating the two sides in their valuation.

That’s what Corriere Dello Sport report today, saying a Blues move for the Brazilian is edging closer and closer to completion.

Everton have been negotiating with Napoli over the midfielder for several weeks, with the pair yet to meet on an asking price for the player.

Napoli had at first demanded €40m in total, but that price has steadily dropped over time, with Everton keener to pay in the €25m range.

That price would be a base fee with bonuses included, with it reported over the last week the last hurdle both clubs have needed to get over is the nature of those bonuses.

There has, though, been a consistent tone in the reports and that has been a deal will be done at some point, with Allan keen to reunite with Carlo Ancelotti on Merseyside.

Corriere continue that today saying ‘the negotiation proceeds’ and that following the latest round of talks the distance between the two clubs is now ‘almost imperceptible’. In other words, it’s tiny. 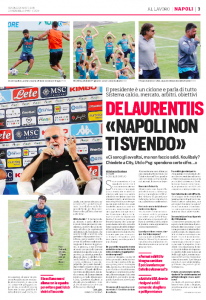 They state that just €2m ‘separates Allan from Ancelotti and Naples from Everton’ although they don’t state how. For example, that €2m could be on the base fee or in bonuses.

Either way, the clubs are very close to a deal and unless there are ‘resounding surprises’ the transfer is done, and it is just a ‘matter of days’ before it is official.

Allan certainly thinks so too, with the newspaper explaining that he is sitting out of training so that he can arrive at Everton ‘in perfect condition and radiant’.

That’s seen him only doing working in the gym and sitting out the other work, including matches, to avoid any unexpected issues or last-minute injuries.