There are some sagas from the summer that we barely believe are still getting some life in the foreign media.

This is the case of Thiago Almada, an Argentine wonderkid who has been heavily linked to Sporting and Manchester City for the past few months.

Portuguese newspaper Record reports today that the 28-year-old has agreed a contract extension with Velez Sarsfield, now tied to the club until 2023.

However, they’ve learned that Almada is still ‘on Sporting’s radar’. Since the Lions have signed many wingers on loan this summer, it’s possible they will try to get him permanently in one of the coming transfer windows. 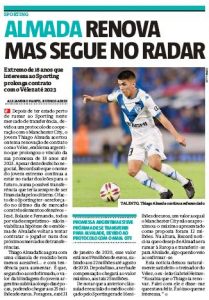 What do Manchester City have to do with it? Well, they should pay for the transfer.

Sporting and City have agreed a partnership this year and it’s the Premier League side who would fund the transfer to have an option to get him later.

Manchester City had a €12m bid for Almada rejected in the summer, and now should offer more, since his release clause has gone from €15m to €25m.