Ruben Dias is likely to be the next big transfer saga at Benfica and so it’s inevitable Manchester United have been linked with the Portuguese defender.

On September 9th, Correio da Manhã reported the Old Trafford club and Manchester City are in a ‘fight’ for the signing, with the defender expected to move in a coming transfer window.

A lot of the reasoning for Manchester United interest will come from their repeat scouting of Benfica matches. Correio da Manhã often put two and two together and end up with five, and they like pushing transfer stories about the biggest stars in Portugal.

They’ll have now been given more encouragement, because O Jogo and Record both report today that an Old Trafford official travelled to Lisbon on Saturday to watch Benfica beat Gil Vicente 2-0. 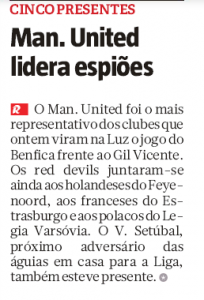 Sure enough, Dias stands out as the likeliest potential target, and he helped his side secure a clean-sheet.

There’s been no claims of talks or any offers, yet Dias is very much seen as a player who will be the subject of growing interest.