The back page of Sunday’s AS has some rather big claims about Spain’s big two clubs and Liverpool.

According to the report, Jurgen Klopp and Virgil van Dijk are ‘two priorities’ for Real Madrid and Barcelona.

Zinedine Zidane and Ernesto Valverde are both already being questioned at their clubs, it’s stated, and therefore alternatives are being looked at.

For AS, Liverpool’s manager is the most highly rated around Europe right now, and his success last season in the Champions League is another ‘compelling reason’ for both Madrid and Barca being keen.

And with the Spanish newspaper also saying both clubs are looking for a commanding central defender for the coming years, that’s where Van Dijk comes in. 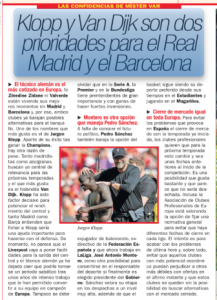 The idea would be to first tempt Klopp, despite the German coach suggesting he’d be keen on a sabbatical year after Liverpool, and then use the manager to snatch Van Dijk away from Anfield.

Van Dijk will be 29 years of age next summer, it surely has to be unlikely that either of the interested clubs mentioned would reach an amount for the Reds to find a move acceptable.

This all sounds like a long shot, to say the very least.