As Atalanta prepare to face Manchester City in the Champions League group stage, there’s special motivation for one of their players.

Italian newspaper Tuttosport has an interview with Pierluigi Gollini, who spent some time as a Manchester United player.

The outlet referred to the game as a ‘derby’ for him, since he’ll be facing his old rivals, and the player talked a little about the specific clash.

“We have to play it openly with everyone. Clearly it will be very hard, Manchester City are one of the strongest teams in the world, but we will try,” Gollini told Tuttosport.

“I played in Manchester United’s youth team and it certainly seems like a sign of destiny. All very stimulating, the team really wants to do very well.” 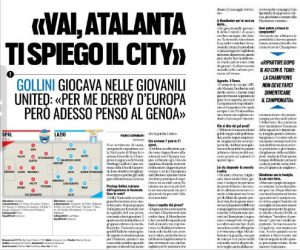 Gollini joined Manchester United in a move from Fiorentina back in 2012. Despite featuring for the club’s U19 and U23 levels, he never managed to be part of the first team.

He left Old Trafford in a move to Hellas Verona in 2014, later joining Aston Villa and finally Atalanta.

His success at the Serie A side has been getting attention from the national team. Although he’s still to make his debut for Italy, he’s been called up to the squad for the past few games and should soon have a chance.