On December 21st, L’Equipe reported Cardiff City had reached an ‘agreement in principle’ to sign Emiliano Sala from FC Nantes.

It was all said to be the work of the club’s president and owner Waldemar Kita, who had been working ‘discreetly’ to agree a deal to sell the striker.

Nantes manager Vahid Halilhodzic wasn’t aware and had even been speaking in public about a renewal for the player, as Kita hatched his ‘secret plan’ to bring a big fee in. Agents were sent to work.

On January 2nd, the same French newspaper explained pressure was being put on Sala to accept the transfer to Cardiff City, even though he wasn’t keen on the move. The idea at that stage was for the English club to offer increasing amounts of money to the player until he said yes, but it didn’t work.

Now L’Equipe have spoken to Kita himself and asked if Sala will leave this month: “We just said that the coach wanted nobody to leave; I am of the same opinion as the coach; so Emiliano Sala must not leave. Now, if he wants to leave for financial reasons, I will understand him and analyse the situation. And I think the coach will analyse the situation too. But then he should be replaced.” 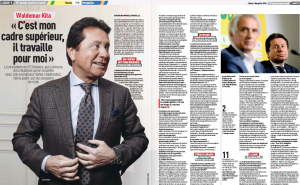 L’Equipe then got straight to the point and put it to the Nantes chief that he’d already tried to push the player towards Cardiff: “No, no, wait: I am not his agent and I have no intention of becoming one. I am president. That he has proposals is another problem. You don’t think I’m going to call Cardiff or whatever. I am not a broker. Today there is nothing on the table.”