FC Nantes president Waldemar Kita has been working behind the scenes for a while to secure the sale of his star striker Emiliano Sala, explain L’Equipe.

The problem is, the way he’s working isn’t exactly pleasing to the Argentine, who would prefer a move to a club with European aspirations, and probably thinks his goalscoring form justifies that.

Kita seemingly doesn’t care for such sporting ambitions and is just looking for the best, and potentially quickest, financial deal.

Even the Nantes manager Vahid Halilhodzic is against a sale, so Kita will have to wheel the charm out if he’s not to face a difficult situation at his own club.

A €20m fee is said to have been agreed with Cardiff, something which has been reported previously, and that’s the deal Kita wants. 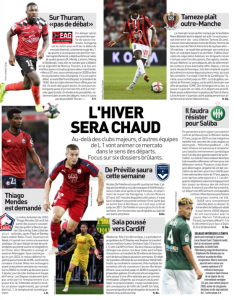 So how can they convince Sala? Well, with lots and lots of money.

The idea is that the Premier League club structure a wage deal which is too good to turn down.

Sala isn’t the only Ligue 1 player who Cardiff want to sign this month, with L’Equipe also reporting the club are prepared to pay €10m for Nice’s Adrien Tameze.