There’s some fun and games going on at FC Nantes if L’Equipe are to be believed.

The French newspaper have a transfer special on Friday and when it comes to Nantes that can only involve Emiliano Sala.

With a contract ending in June 2020, the 28 year old’s value will start to come under pressure soon, regardless of what he’s achieving in Ligue 1.

Fifteen goals so far this season has brought the Argentine to the attention of Cardiff City and others, and the French club’s owner, Waldemar Kita, has been ‘discreetly’ active in talks to sell the player.

Vahid Halilhodzic, the club’s manager, has spoken about renewal efforts, but despite a public face being given that such a track is a possibility, in private Kita has been doing 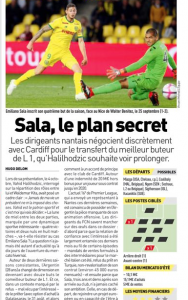 L’Equipe say the owner has been working with English middlemen and that’s led to an ‘agreement in principle’ to sell the player to Cardiff for around €20m plus bonuses.

It sounds positive for Cardiff City, but the situation does seem quite delicate.

Newcastle have ‘asked for information’ for surprise attacker signing – Will...