Home Europe Signing Liverpool player ‘remains a solution’, and ‘would be cheaper’ than alternatives
SHARE

After wanting to leave AS Monaco in 2017, Fabinho finally got his wish when he completed a switch to Liverpool, but only a year later.

Last year, Paris Saint-Germain were one of the clubs keen on securing the services of Brazil international and if a report from today’s edition of L’Equipe is to be believed, the club are still interested in him.

Thomas Tuchel wants his employer to strengthen the midfield in the winter market and the 25-year-old has emerged as one of the targets, along with Chelsea’s Cesc Fabregas and Idrissa Gueye of Everton.

The latter doesn’t have the experience of playing in the Champions League, while the former Arsenal star’s salary demands could become an issue for the Ligue 1 winners.

However, the Merseyside club’s summer signing ‘would be cheaper’ than other alternatives and he ‘remains a solution’.

The French champions have already discussed with the Anfield outfit about the possibility of taking him on loan in January when the two clubs faced each other in the European competition in November. 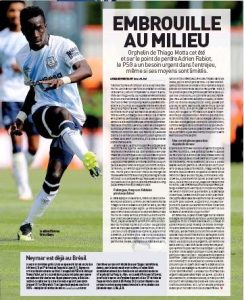 Jurgen Klopp had earlier made it clear that Liverpool will not allow the South American to leave the club and considering the form he has been lately, it is unlikely that PSG could get this wish of having Fabinho in their team.