On February 28th, Jordi Alba committed his long-term future to Barcelona by signing a five-year deal with the La Liga winners.

Two days ago, The Sun in England reported the Spanish champions and Atletico Madrid ‘want’ Leicester City’s Ben Chilwell and the two clubs have joined Manchester City in the race for the left-back, who is valued at £50m (€58m).

A ‘Confidencial’ report from Sport takes a look at these claims linking the 22-year-old with a move to Camp Nou.

It’s stated the priorities of Barca are to strengthen other areas, which is why they would be unwilling to pay the ‘exorbitant figure’ of €58m to sign the Foxes defender.

For the past few months, the Blaugrana have been clear that they are in the market looking for a backup for Alba, but Chilwell is unlikely to be that player.

Sport’s report may come as a sense of relief for Leicester, with one club out of the race for Chilwell. 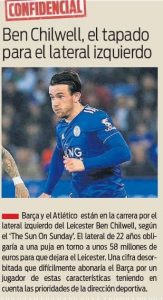 In recent times, we’ve carried reports which explained Alberto Moreno of Liverpool and Arsenal’s Nacho Monreal have emerged as targets for Ernesto Valverde’s side.