On June 28th, Sport Witness covered a report from Gazzetta di Modena which stated Carpi were still confident they could sell Jerry Mbakogu to Leeds United this summer, despite problems on the deal.

The Serie B club were said to be keen to finalise the move over the ‘next few days’, despite claims from England it was dead.

A day later the same Italian newspaper, who are local to Carpi, published an article denying there was ‘black smoke’ on the move. It was explained that despite reports from England saying Leeds had pulled out, Carpi hadn’t heard anything of the sort.

There was an awareness Leeds want a discount on the striker and that talks would continue. 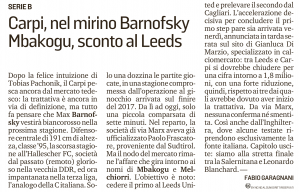 Sunday’s edition of Il Mattino claimed a deal is now much closer, with the clubs back in talks and a fee of €1.8m looking like it will get the player.

In their Sunday edition it’s stated a big discount will be given to Leeds and there’s been a ‘decisive acceleration’ in the talks. Information from Gianluca Di Marzio is leaned on, and it seems that from the Italian side of a deal there’s a growing confidence this one is happening for around €1.8m.