Home Championship Leeds United back in negotiations, transfer much closer, player can move to...
SHARE

If Italian newspaper Il Mattino are correct, Jerry Mbakogu to Leeds United is back on, and is much closer than it has been for a while.

The Championship club had a clause to sign the player for €3.5m before the end of June, but that deadline passing didn’t really mean much given Leeds had already decided the figure was too high.

Mbakogu’s knee issue last season had been a reason to ask for a discount and then it was widely reported in England that the deal was dead.

Not so in Italy, where the media fed by Carpi were insistent Leeds hadn’t informed the Serie B club they were pulling out of a deal for the striker.

Il Mattino reports that talks have now started again, and Leeds look like they can get a big discount for the player.

Carpi have come down to €1.8m in an attempt to get the deal done, and the Italian newspaper sounds somewhat confident an agreement can be reached at this figure. 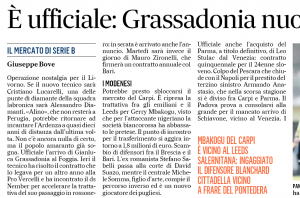 Mbakogu is very highly rated by the media covering Serie B and this may not be quite the terrible deal some Leeds United fans are convinced.

Leeds could offload others of similar or lesser quality for a bigger fee than what is paid for the Carpi man.