Home Championship ‘The fact is… there is no news’ – Leeds United transfer all...
SHARE

If Leeds United have really decided they’re not signing Jerry Mbakogu, then it appears they haven’t told Carpi about that.

The situation has been ongoing since January, when Leeds came to an outline agreement with the Serie B club over a transfer. Some reports have claimed a deposit was paid and the generally reported fee for the move has been €3.5m.

Mbakogu was injured towards the end of the season, carrying a longer term knee issue which was solved, or reported to be, by a visit to specialists in Barcelona. The striker then got himself an Italian passport, meaning there’d be no work permit needed for a move to the Championship club.

The appointment of Marcelo Bielsa naturally brought doubt upon the deal, and there were claims in Italy of Leeds United asking for a discount, the deal was said to be stalling.

Quickly followed claims in England that the deal is dead because Bielsa has rejected the player, but Gazzetta di Modena dispute that. They directly reference the claims of ‘black smoke’ from England, but say ‘the fact is… there is no news’. 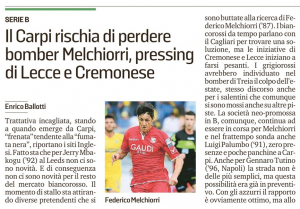 Carpi haven’t been informed either way what’s happening and it’s stalling their own summer signings.

The club have been hoping to sign Federico Malchiorri, but with the Mbakogu deal not settled, they’re worried others could come in.