Fanatik claim Trabzonspor are not prepared to pay the €1m redemption fee for Leeds United forward Caleb Ekuban and the Turkish club are hoping they can sign him for a reduced price.

The 24 year old is currently on loan with the Super Lig club.

Ekuban has impressed for Trabzonspor in recent weeks, with the Leeds United loanee making a name for himself as a ‘Super Sub’. The 24 year old has scored two goals in in as many games after coming off the bench.

According to Fanatik, Ekuban’s attitude has impressed Trabzonspor manager Unal Karaman and he wants the club’s president Ahmet Agaoglu to sign him permanently.

Trabzonspor agreed a redemption clause with Leeds United in the summer but Fanatik say they want to renegotiate this with the Championship side. This is no surprise, an attempt at a cheaper price is probably thought worth a go. 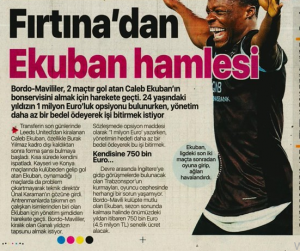 Ekuban is unlikely to feature at Leeds United under Marcelo Bielsa, with reports this week the attacker is keen to remain in Trazbon.

The player joined the English side 18 months ago but failed to make an impact in his debut season at Elland Road.