With a large number of centre-backs at his disposal, and an early preference for a Harry Maguire-Victor Lindelöf partnership, Ole Gunnar Solskjaer couldn’t promise Chris Smalling the first-team football he wanted.

That wasn’t good enough for the former Fulham starlet, and a loan move to AS Roma, who were desperate for defensive reinforcements, was sorted out late in the transfer window.

Picking up an early injury, the 29-year-old missed a number of games early on, but as soon as he recovered, he showed why the Serie A team were willing to take a gamble on him.

Roma’s early defensive woes calmed a bit, and Paulo Fonseca’s defence seemed a bit safer with Smalling in its midst. 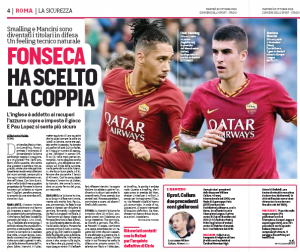 These early performances haven’t gone unnoticed at the club, and Corriere dello Sport’s Rome edition claim both Franco Baldini and Gianluca Petrachi ‘have already communicated they are interested in making the loan a permanent one’.

There have been conflicting reports about whether or not there is an option to buy in the loan deal between Manchester United and Roma, so it could be that fresh talks will be needed.

Either way, it’s stated that from Old Trafford, the ‘door hasn’t been closed’, but, for now, we wait.