The rumours sending Kieran Trippier to Napoli have been a bit quiet over the past week or so, and there might be a few reasons for that, namely the fact Tottenham are preparing for a Champions League final.

The last thing Spurs will want is speculation surrounding one of their players ahead of their biggest game of the season, and we’re sure the defender is also fully focused on trying to bring the trophy home.

Furthermore, the season in Italy hasn’t finished yet, with one game left to go, even if Juventus secured the title a while back.

That means both clubs are still busy for at least a couple more weeks for potential official negotiations, but that hasn’t stopped agents moving behind the scenes. 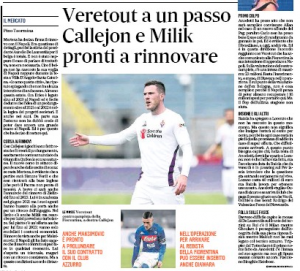 According to Il Mattino, Napoli have already secured an ‘agreement’ with Trippier’s representative ahead of a move to Naples.

However, the local newspaper state ‘no contact’ has taken place between the two sides.

This would suggest that any reports of offers being made aren’t factually correct, with previous claims mentioning fees of €20m being thrown around.

The story will likely rumble on over the next few weeks regardless, but this scenario does seem plausible, as we all know personal terms tend to be long agreed before a bid is made, even if it isn’t the most legal way of doing things.