Leandro Trossard is thought to be a likely exit at Genk this summer, so much so that the Belgian club are already pushing ahead trying to recruit his replacement.

The player’s agent has talked up interest from Arsenal on multiple occasions over the past few months, clearly wanting to get it out there that the Gunners are keen.

Whilst there’s every chance interest from the Premier League club has been talked up to hype the player’s value, it obviously can’t be ignored when there’s direct quotes on the matter.

It’s possible Trossard played his last game in front of his fans at the weekend, and the Belgian media today has pictures of him potentially saying goodbye.

Het Belang van Limburg again push interest from Arsenal, as well as Wolfsburg, and say Trossard grinned when talking about the potential transfer.

He’s quoted as saying: “I will not leave Genk for any team. Everything must feel good, also for my family. Because this will be an important step in my career.” 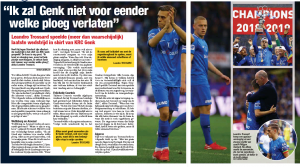 The 24 year old is clear that playing time is an aspect in his choice, but not an overwhelming one: “I take that into account, but not too much either. I want to compete and fight for my place. Wherever. Accepting a challenge is always the best.”

If Arsenal interest is as real as has been claimed, then Trossard may not want to leave it too long. They’re not just ‘any team’.