According to the outlet, both the player’s agent and his family understand that this is a good time for the 19-year-old to leave Lisbon and accept one of the offers he has.

Atletico Madrid, Barcelona, Juventus, Manchester City and Manchester United are said to be the clubs who have ‘already shown interest’ in the teenager, who scored 20 goals and made 11 assists this season.

Correio da Manhã says Félix has been getting several bids of ‘dozens of millions’, and has an offer to earn €4.5m net per season. 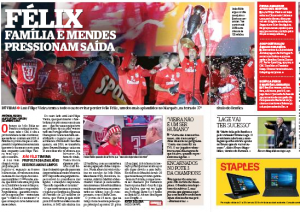 Benfica president Luís Felipe Vieira doesn’t want Félix to go now. For that to happen, he demands the €120m release clause, and the buying club need to pay the commission as well.

Vieira has been trying to convince Félix to stay for one more season, and is using Renato Sanches’ failure at Bayern Munich as an argument. He even tried to increase the player’s release clause to €200m, but Jorge Mendes turned down that possibility.

Correio da Manhã also claims that during the title celebrations, Benfica TV showed Vieira saying something to Félix in the dressing room, with the player responding to him: “I doesn’t depend on me only.”

The newspaper also recalls that at the title game, where Félix scored a beautiful goal, Atletico Madrid and Manchester United were both watching him from the stands.

On Sunday, newspaper Record said these two clubs have been negotiating for Félix. It was claimed that the Premier League side would pay the release clause if necessary.

Chelsea ‘particularly serious’ about signing midfielder – Have second option as...