Roman Abramovich is named personally and it’s explained the Chelsea owner is ready and willing to pay £45m to get the player’s signing secured as soon as possible, with Corriere saying ‘immediately’.

Cagliari have been looking for a €50m fee and the reported Chelsea offer is likely to be near enough to such a figure. The Premier League club would face strong competition from Serie A, with Napoli and Inter Milan said to be the clubs pushing hardest.

Despite that, it’s unlikely either of those would want to compete with the claimed £45m, hence the explanation that Chelsea are ‘overtaking’ others.

Just like has happened with Christian Pulisic’s purchase from Borussia Dortmund, it’s 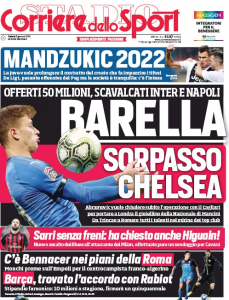 explained Chelsea would leave Barella on loan at Cagliari for the remainder of the current season.

Juventus had been considering their own swoop but have now moved on to other midfield targets, including Arsenal’s Aaron Ramsey.