Turin sport newspaper Tuttosport seem rather over optimistic about their local club Torino being able to sign Roberto Pereyra in the summer window.

The Watford midfielder is described as a ‘super football’ signing for Torino and, this is the crucial bit, it’s explained he’d be keen on the move himself.

Tuttosport explain that Torino qualifying for the Europa League would strengthen their hand further on a transfer which is estimated at around €20m.

Should Pereyra genuinely be looking at a Watford exit then it may be likelier he’d be aiming higher than Torino, so his enthusiasm for such a transfer could be questionable. 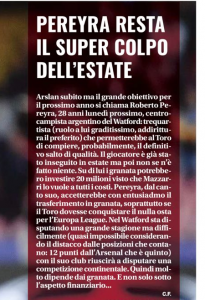 It’s unlikely the club would be willing to pay much higher wages than Watford, indeed they may not be ready to match his current salary.

The same goes for the €20m transfer fee, there seems little reason the Hornets would accept such an amount given their player will have two years left on his deal in the summer.