The Italian media are treating the Watford exits of Stefano Okaka and Marvin Zeegelaar as pretty much done.

Gazzetta dello Sport say the pair represent a lot of what Udinese were looking for in the January window and it’s all presented as a sure thing rather than a rumour or even an advanced possibility.

Okaka is supposed to be able to ‘heal’ the club’s goalscoring problems, but fans of the Italian side have been left distinctly unimpressed.

Gazzetta explains Udinese supporters haven’t had their ‘imaginations ignited’ by the deal, and don’t necessarily agree that Okaka is going to help them put their goalscoring issues in the past. 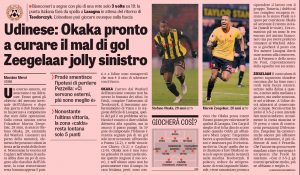 Some Watford fans would likely agree with the sentiment.

Udinese are just five points clear of the relegation zone and supporters had been expecting a higher level of investment to make sure they don’t get dragged further down and potentially slip towards Serie B.