On Friday evening, Manchester United fans around the world tuned into Free Sports as the channel got more attention than they ever have before.

Showing Sporting against Benfica, it was all primed for Bruno Fernandes to score the winner and leave the pitch in tears, doing an interview afterwards explaining he’ll always love his Lisbon club but now is the time to be a Red Devil.

None of that happened. Sporting were predictably poor, although Benfica weren’t much better, and it took a substitute appearance by Rafa Silva to decide the match. His two goals will assure he’ll be the subject of transfer rumours over the coming months (maybe hours).

So, what’s being said today in Portugal about a Bruno Fernandes move to Manchester United? Here goes.

Record explain Sporting are pushing for a fixed amount in cash, whereas the English club want more to be based on bonuses. If, as reported a couple of days ago, those bonuses are based on things like United winning the Premier League and Champions League, and Bruno picking up the Ballon d’Or, then it’s obvious why things hit a bump in the road.

On a very bright note, Record state: ‘Sporting and Man United are approaching an understanding and may in the next few hours reach full agreement’

We say very bright, but it’s honestly felt like the above for a week. The clubs agree generally on the value of a deal but when it comes to how that is made up… trouble happens.

Anyway, Record say, according to their own information, that United are ‘willing’ to raise their offer to €60m (presumably fixed) plus €5m (presumably bonuses).

Sporting want €70m as a headline figure, so perhaps Ed Woodward can throw in another €5m bonus based on Bruno winning the Golden Glove award for most clean-sheets in a season. 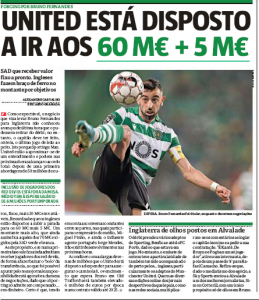 They believe Jorge Mendes is still involved, and assume that because of that there’ll be ‘developments in the coming hours’.

Amusingly, Record also look at how the match against Benfica was viewed in England: ‘Both in the various online editions of sports newspapers in that country, as well as on social media, there were many comments praising the captain and asking for his hiring. “He’s Kanté, De Bruyne and Pogba in one player”, shot an internet user, after a pass from the ‘8’ to Rafael Camacho.’

O Jogo say Bruno would have wanted a better farewell, and they believe negotiations with Manchester ‘should’ be ‘concluded this weekend’. 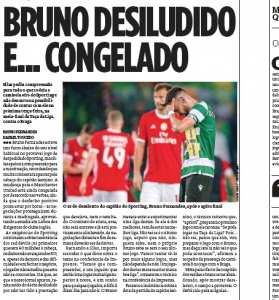 They then flip the other way, explaining his transfer is ‘frozen’ because there’s disagreement over the fee, however, there could be progress in ‘hours’, as ‘the negotiations continued during the night, taking advantage of the stay in Lisbon of the English club’s leaders’.

Bruno himself is presented as thinking the transfer will happen.

A Bola, bless them, seem as bored of it all as us and don’t really cover the transfer situation.

Meanwhile, the BBC report Manchester United ‘will not pay’ the €80m being demanded by Sporting, which is interesting because it’s not thought, in Portugal at least, that the club are demanding that.

There’s a very good chance Team Woodward are sending out a message of it all being Sporting’s fault, and that Frederico Varandas’ men are being unreasonable, so if the deal fails it won’t be down to United, and if the deal comes off at €60-70m (which was always thought to be the case anyway) then the Old Trafford negotiating squad can present themselves as winners.