Everton manager Carlo Ancelotti wants the club to sign Juventus midfielder Emre Can this month and the player is keen on the move.

That’s according to Gazzetta Dello Sport, who report that the Italian boss ‘insists’ upon signing the German midfielder to boost his options.

According to the newspaper, negotiations between Everton and Juventus are ‘taking shape’, with Juve chief Fabio Paratici smelling ‘a significant capital gain’ from the potential move.

Everton are expected to make an offer that Juventus can’t refuse for Can, who sees the chance to return to the Premier League as an ‘important opportunity’ for his prospects of making Euro 2020 with Germany.

He is open to the move after not featuring much under Maurizio Sarri and has a meeting planned with Paratici to discuss his future.

So far there has not been a ‘formal negotiation’ between the two clubs but ‘clues coming from England’ suggest there will be one and it will involve ‘important figures’.

Ancelloti’s interest ‘flatters’ Can and his agent is working on the economics of the deal, with Can earning around €5m plus bonuses at present. 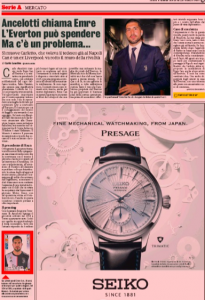 That deal runs until 2022, but Everton are ‘obviously’ willing to offer a contract until 2025, with a pay packet equal to or potentially higher than his current one.

According to the newspaper, contacts have been kept ‘under review’ for ‘diplomatic reasons’ because of Can’s history at Liverpool, and previous comments that he would never play for Everton.