Brentford were one of the clubs to show interest in Toulouse’s Aaron Leya Iseka in the summer transfer window.

That’s what L’Equipe are reporting in today’s newspaper, where the main focus of the report is on the striker close to joining FC Metz.

Ibrahima Niane suffered a serious knee earlier this month and will be out of action for at least six months, meaning Metz were forced to search for a ‘joker’ to compensate for their forward’s injury setback and also due to Habib Diallo’s move to Strasbourg.

Leya Iseka, who is Michy Batshuayi’s brother, has been identified as the ‘joker’ and this choice was ‘dictated by a criteria set’ by Metz manager Frédéric Antonetti.

A source close to Toulouse has informed L’Equipe the two clubs agreed terms for a loan deal on Wednesday and the Belgian is expected to arrive today for his medical. 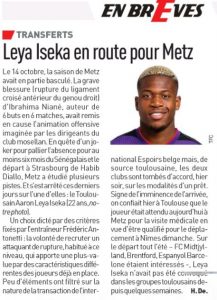 At the end of the report, Brentford get a mention. It’s claimed the Bees, FC Midtjylland and Espanyol ‘were interested’ in the same player in the last window.

However, a move to either of these clubs never materialised and Leya Iseka is now closing in on a loan move to Metz.