Ousmane Dembélé emerged as a target for Manchester United in the final stages of the last transfer window, but the Red Devils were unable to bring the Barcelona player to Old Trafford.

The winger wasn’t interested in joining Ole Gunnar Solskjaer’s side. The La Liga side’s failure to get him out of the club blocked them from signing Lyon’s Memphis Depay, who was a priority target for Ronald Koeman.

Thursday’s edition of Mundo Deportivo explains the Frenchman became an ‘annoying spot’ for the Barca coach in the last days of the window.

The World Cup winner disappointed the Dutchman in the first few games, which is why the coach was looking to offload him. Dembélé’s situation became even worse after he refused to go out on loan to United in the final stretch of the summer window.

Despite a failed move to the Premier League side, the former Everton manager did not blacklist the wideman and provided him with opportunities at the Catalan club. The 23-year-old scored in his side’s Champions League win over Ferencvárosi last week.

Koeman started Dembélé against Juventus on Wednesday and he repaid the manager’s faith by scoring the opener for Barcelona. The Catalan club went on to win the tie 2-0 in Turin. 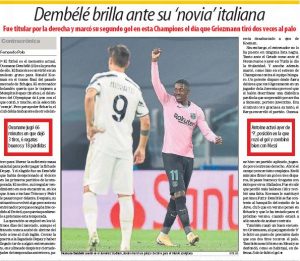 He was replaced by Ansu Fati in the second half and Mundo adds Dembélé went happily to the bench after shining against the club that considered signing him in the summer.

The newspaper adds Juve are tempted to sign the ex-Borussia Dortmund man at the end of this season, when he will have a year left on his contract with Barcelona.