Sessegnon joined the Bundesliga side on a season-long loan on deadline day after it was made clear he would not get regular game time at Spurs.

The full-back joins a long list of English players to have made the move to Germany in recent years, with many looking to replicate the success enjoyed by Jadon Sancho at Borussia Dortmund.

One such player to do so is Arsenal’s Reiss Nelson, who joined Hoffenheim on loan in 2018, enjoying a successful year in which he scored seven and assisted one in 29 games.

That was a loan he seemingly enjoyed, with Sessegnon revealing to Kicker that “he only told me positives, which made my decision even easier”.

Like the Arsenal youngster, the Tottenham man will be hoping for an extended period in the first-team this season after a frustrating time at Spurs where has made just six appearances in the Premier League and three in the Champions League since a big-money move from Fulham.

Key to his development will be nailing down what he is, with his time as a professional seeing him flit between a full-back and winger. 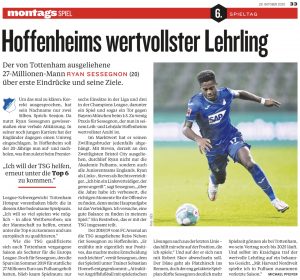 That is something the Tottenham man believes he’s already doing and says Hoffenheim’s style under Sebastien Hoeneß will help that.

“I’m a left-back who likes to attack,” he added.

“And over the years I’ve improved my ability to find the right moments to attack, because my main job is to defend.

“I try to find a good balance in my game.

“Attractive attacking football with playful solutions even from the last line – that helps me a lot in the position I play.”