Ferran Torres left his boyhood club Valencia for Manchester City in the summer and signed a five-year contract at the Etihad.

The winger has enjoyed a good start to his life at City as he has managed three goals and registered two assists in seven matches in all competitions.

Two of those goals came in the Citizens’ Champions League victories over FC Porto and Marseille, and he also scored in his last European outing for Valencia, which was against Atalanta in March.

‘Ferran Torres, a record-breaking talent’, reads a title in today’s edition of Sport.

With his goal against the Ligue 1 side earlier this week, Torres became the youngest Spaniard [20 years and 241 days] to score in three consecutive Champions League matches, surpassing the likes of Fernando Torres, Raúl and David Villa.

The newspaper states ‘there were many voices that called Ferran’s departure to Manchester hasty’, with a move to the Premier League club seen as a ‘giant step’ in his career, which had ‘certain risks’, such as having limited playing time at City.

On paper, according to Sport, Torres was set to compete with the likes of Raheem Sterling, Riyad Mahrez, Bernardo Silva and even Phil Foden for a place in the starting XI. 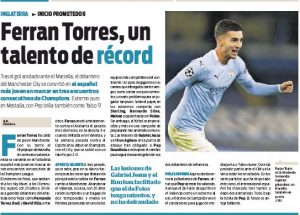 Injuries to Gabriel Jesus and Sergio Agüero has forced Pep Guardiola to use the former Spain international as ‘false 9’.

The former two being sidelined has ‘made it easier’ for the ex-Los Ches man to have more minutes in his first season in England and he has not disappointed when provided with opportunities.

Time should tell if he can continue to shine at City, but so far, Torres’ decision to join Guardiola’s side has worked out well for him and the English club.

Club know Manchester United are keen on player – And Bruno...