The Portuguese media have so well convinced themselves that Manchester City want William Carvalho that they’re beginning to wonder where the club’s offer is.

Sporting need to sell players this summer and the dutiful Portuguese press have been busy finding homes for them. For several months it’s been insisted Manchester City are keen, and that was largely motivated by the midfielder changing agents to Pere Guardiola.

In Portugal that switch is clearly seen as significant, and showing something about interest from Pep Guardiola. Record say the club are insistent with their interest. 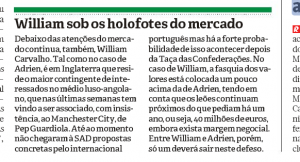 So how to explain the lack of an offer? Everything is waiting until the end of the Confederations Cup, of course, when it’s expected big proposals will come forward.

Record believe William Carvalho is now priced at €40m, but the price changes almost daily. As for Manchester City, their interest would be very much welcomed, especially as it’s already been taken for granted in Portugal.