Home Europe “It will be full… it’s going to be spectacular” – Rangers signing...
SHARE

Daniel Candeias is very excited ahead of Rangers match against Progres in the Europa League on Thursday.

Having moved from Benfica, and following four different loans away from the Lisbon club, Candeias now sounds very happy to be ahead of his Ibrox bow.

The Portuguese media are also keeping a close eye on Rangers, and with Pedro Caixinha interviewed last week, this time it was time for Candeias.

Speaking to Portuguese newspaper Record, the  Rangers attacker explained he’s already impressed with the Scottish premiership club and expects things to get even better from here.

“The stadium will be full! Here they sell tickets before the season starts and it will be packed, as usual. I look forward to my debut at Ibrox. I think it’s going to be beautiful. I’ve felt the fans’ tremendous feeling. And now that Rangers will return to Europe they are looking forward to Thursday. And so do we.

“We want to play in our stadium and give a first joy to fans in this inaugural game of the season. It is normal that at the beginning we are not yet physically fit. But the team already has 24 training sessions and, in the beginning, it will cost a bit, but I believe that on Thursday we will present some of the ideas that the coach intends to implement. We want to win because Rangers are a club used to winning. It’s going to be a spectacular 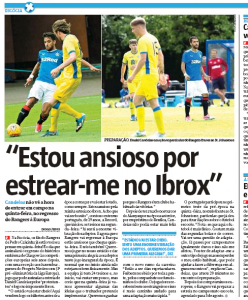 day. I was well received by all the people, my teammates and staff of the club.”

See, told you he was very excited.

Candeias clear optimism and contagious belief must some sort of sign of progress under Caixinha, and a real will at Rangers to move forward under the Portuguese manager.

In football things can go wrong very quickly, but right now Rangers sounds very much like a happy ship, and a club on the up.