O Jogo have a small update on Andreas Samaris in their Saturday edition.

After big claims of Newcastle United offering €15m for the Greek midfielder, and Benfica subsequently rejecting that offer, the Portuguese newspaper say the two clubs are ‘continuing negotiations for the transfer’.

Benfica still want the full €20m paid, and Newcastle presumably want the Lisbon club to come closer to their way of thinking. There doesn’t appear to be an imminent breakthrough, but it doesn’t seem at deadlock stage either, with the situation being made to sound relatively promising. 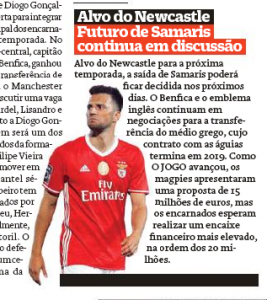 O Jogo say the situation could be sorted out ‘within the coming days’, and that would see Rafael Benitez get a reasonable sized target on board.

Should Newcastle go to the €20m, then it’s a big outlay for Samaris, who is a Benfica squad player.

If no agreement can be found, Benfica will try to extend the midfielder’s contract beyond June 2019.