Spanish newspaper Marca has a big, and intriguing, claim on Manchester United in their Saturday edition, and it’ll certainly be of interest to fans of the club.

It’s reported the Premier League side  have plans to grow for the future, aware they can’t continually change everything from manager to manager. There have been countless reports about a new structure at Old Trafford, and Marca believe it will also include initiating partnerships with clubs in other countries.

Manchester City’s relationship with FC Girona is cited, but it’s something United themselves have dangled their toes towards more than once.

Marca, unsurprisingly, believe a partner team in Spain is ‘the first big objective’.

That would allow Manchester United to send players on loan to whichever Spanish club they could partner with, and have more power over the situation than a typical temporary transfer. 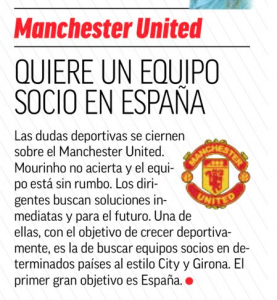 It’s also a way of signing players from outside the EU who would be unable to get a work permit.

Indeed, in the current climate, although Marca don’t say so, it’s not a bad idea to explore this route in case a no-deal Brexit would present problems with signing some young EU players.

At this stage there’s no suggestion of which club it may be.