Eden Hazard hasn’t shut up about recently about his desire to play for Real Madrid.

Seeing his friend and national teammate Thibaut Courtois make the move from Chelsea will have only served to increase the desire for such a move, but in typical Hazard fashion he’s explained it’s not really the be all and end all.

In a brilliant interview with Belgian newspaper HLN, the Chelsea star’s personality has once again come across clearly and Hazard is so laid back it’s a wonder he’s got to the level of the game he’s at.

Nothing will faze him, nothing is going to be a worry, and feeling under pressure simply isn’t something which comes into his thinking.

First off, Hazard was asked if his wife thinks a Real Madrid move would be good, and the Chelsea player explained: “Natacha doesn’t worry about that either, she just goes where I go.” 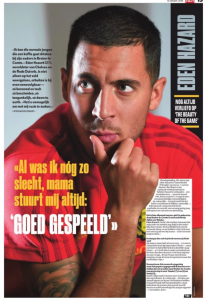 So whilst the wish is certainly there, it’s not a desperation and the option of remaining with Chelsea doesn’t seem such a terrible thing for Eden Hazard.