Wednesday’s edition of Mundo Deportivo has a big feature on what will happen with Arthur.

Barcelona have long been linked with a move for the Gremio player, and after he was photographed wearing a Barcelona shirt, with the club’s Robert Fernandez standing near, a big problem was presented.

Had they wanted, Gremio could have caused all kinds of problems for Barcelona which may well have ended up in a FIFA court, but instead, according to reports, a deal was agreed.

Barcelona accepted they’d pay €39m including variables (fixed fee €30m) for the player, which is colossal by Brazilian standards and likely over the top. To fix everything, €4m of that has already been paid, report Mundo Deportivo, and to make the transfer go through Barcelona have to commit by the end of July.

Despite Barca having paid the €4m already, it’s claimed by the Catalan newspaper that the club aren’t completely convinced whether to go through with the rest of the deal. There’s debate going on over whether other targets would be better. 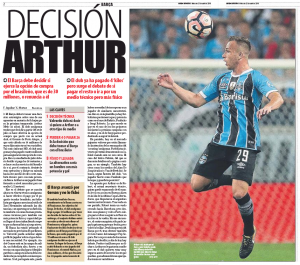 Whilst the Gremio midfielder is appreciated for his technical skill, Mundo Deportivo point out Arthur is 1.72m tall and therefore Barcelona would be considering more physically imposing options.

It’s stated that whilst nobody at the club would be happy to lose €4m, it may be better than committing a further €26m if Arthur isn’t the right man for Barcelona.