Pierre-Emerick Aubameyang, who Bild today call a ‘scandal striker’ is edging closer to a move to Arsenal.

The German newspaper have been leading the story over the past week and on Wednesday say, according to their own information, that Aubameyang to Arsenal ‘should be made perfect in the coming days’.

The player’s father, also his agent, is already in London for talks to try and finalise the deal, and the amount it’s expected Arsenal will pay has now crept up to €70m.

To replace Aubameyang, Borussia Dortmund have a new target in their sights, say Bild, with Chelsea’s Michy Batshuayi being eyed up. 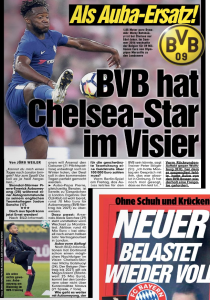 Batshuayi has over the past few days been strongly linked with a loan from Chelsea to Sevilla, as Antonio Conte’s side look to sign Andy Carroll before the end of the transfer window.

Arsenal’s Olivier Giroud has also been linked with moving to Dortmund, potentially as part of the deal for Aubameyang.

Aubameyang to Arsenal could cause a domino effect of transfers before the end of the month.