Arsenal are now the Premier League club being most linked with Philippe Coutinho, and it’s been that way for several weeks.

The Brazilian is on loan at Bayern Munich from Barcelona, but the German won’t be using their option to sign him permanently.

Last Friday, he scored two goals and registered an assist in Bayern’s 8-2 win over the Spanish giants in the last eight of Champions League. A day later, Mundo Deportivo reported the Gunners have ‘proposed a formula’ to take the 28-year-old on loan with an option to buy next summer.

It was also suggested the former Liverpool star is also looking to return to the Premier League.

Monday’s edition of Mundo once again states Arsenal, along with Leicester City and Tottenham Hotspur, are the clubs chasing the player.

However, none of these English sides have ‘made a move’ for the playmaker, especially because of the Coronavirus outbreak.

It’s claimed there are only a few clubs in England who can cover Coutinho’s salary and Barca’s demands, for either a loan or permanent transfer.

Mundo suggest Mikel Arteta’s side may not have the financial resources to complete the playmaker’s transfer this summer. 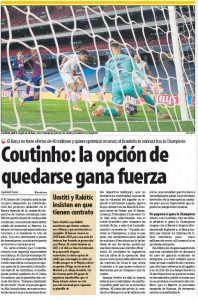 Therefore, ‘Coutinho’s future could take an unexpected turn’ and he could be included in Barcelona’s plans for the 2020/21 season.

The report adds the South American may be given the chance to start with a clean slate under a new manager.