Barcelona’s torrid Friday night entertained people around the world. Bayern Munich were excellent and brilliant to watch as they charged to an historic victory in Lisbon.

When Philippe Coutinho entered the pitch, nearly everyone watching must have wanted the Brazilian, on loan at Bayern from Barca, to find the back of the net. He did that, twice, and also provided an assist for Robert Lewandowski.

Given how bad Barcelona were, it wasn’t too hard to believe Coutinho could actually be a useful player for them next season. Mundo Deportivo don’t seem convinced by that on Saturday, and they also go over Arsenal interest again.

The Gunners are the Premier League club most linked with Coutinho right now, and that’s largely due to the connections via agent Kia Joorabchian.

Mundo Deportivo say Arsenal have ‘proposed a formula’ for the signing, which would see them take the player on loan and have a purchase option next summer, the way Bayern signed him last year. 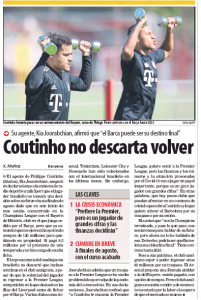 However, Barcelona ‘need to sell’, so will wait as long as possible before agreeing to any loan, in the hope a club will arrive prepared to pay for a full transfer.

Coutinho wants a return to the Premier League, so the options are limited.

Especially after their 8-2 loss, the whole world knows how desperate the Catalan club are, and there’s no way they’ll get anything like the €80m they wanted.