Ousmane Dembele will always be linked to Arsenal, we may as well accept it.

Prior to moving from Borussia Dortmund to Barcelona there were repeat claims of interest, and those have continued since then.

Monday’s edition of Sport says that both the Gunners and Manchester United are following the player’s situation. He hasn’t had the impact at Barca which was expected after his big money move, and there’s been repeat injury issues to contend with.

Arsenal are being tentative before making a move, knowing that it would require a big investment to sign the player. It’s explained they’re ‘investigating’ Dembele’s personality and lifestyle away from the pitch.

They want to know if that lifestyle has contributed to the injuries, whether Dembele is just prone to such fitness problems, or if it’s down to Barcelona’s treatment of him. 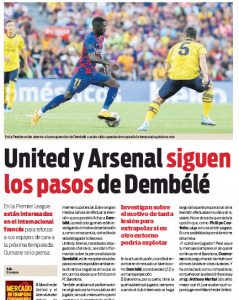 Sport say Arsenal ‘are collecting data to find out if it is possible to change this negative dynamic that he has been in since he joined FC Barcelona’.

The Catalan club would be willing to send their player out on loan, which cuts a large part of the initial cost, however, they’d want a club to pay the majority of his wages.