It’s no secret that Tottenham were after a striker during the January transfer window to make up for the fact Harry Kane was going to be injured until around April.

Various names were linked with a move to José Mourinho’s side, and yet no goalscorer arrived, with Spurs deciding to spend their money elsewhere, on a winger, in the shape of Steven Bergwijn.

It all meant very little since the Covid-19 pandemic brought the league to a halt and Kane will be back once football resumes, but among those Spurs did look at, alongside Aston Villa, was Crystal Palace’s Christian Benteke.

It’s no surprise both clubs looked at Benteke, since he has been in the Premier League for many years now and has shown an eye for goal over that period (especially during his stint at Villa Park), even if the past two seasons have been a struggle for him, finding the back of the net just twice in his last 36 league appearances.

However, the interest from Spurs and Villa was very real, as Benteke discussed his January transfer window in an interview with La Meuse on Monday. 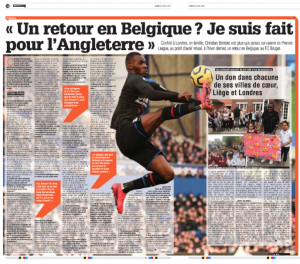 He said: “I take the interest of both those clubs as recognition. Here, people are decent: they know you’re a good player, that you can bring something extra. Everyone goes through complicated moments without it putting their value in doubt.

“In England, all the parameters are taken into consideration, which goes beyond the number of goals scored. The number of aerial duels won is where I’m quite good. The pressure I put on the opposition defence, playing with my back to goal, the player’s professionalism, how he fits in a system: all that comes into play, starting from the principle that a player’s quality doesn’t evaporate.”

As for why he decided not to ‘go further’ with Tottenham or Aston Villa, he replied: “Because I needed stability, especially with the kids. Plus, I’m really happy at Crystal Palace.”