Yunus Musah came up through the ranks of Arsenal’s youth system and was considered one of the great promises of the north London club’s academy.

The 17-year-old left the Gunners for Valencia in the summer of 2019, and prior to his exit, Unai Emery, the then manager at the Emirates, had the intention of including the midfielder in his plans for Arsenal last season.

Last month, Marca reported Emery was ‘hurt’ by the United States international’s ‘unexpected escape’ from the Premier League side.

The youngster already has nine league appearances to his name this season, and today’s edition of AS takes a look at Los Ches plans for their talented player.

Musah’s current deal with the La Liga side runs until 2022, and Valencia’s plan is to ‘shield’ the teenager once he turns 18 years of age on November 29th. After that, he will be eligible to sign a long-term contract until 2026 with his current employer.

Former Valencia director Mateu Alemany and Pablo Longoria, their ex-sporting director, ‘put on track’ Musah’s long-term renewal on the ‘same day’ they convinced him to leave Arsenal and sign for the Spanish club. 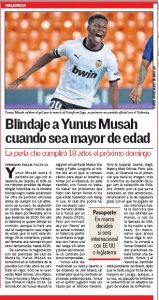 According to the report, Javi Gracia’s side retain an option to further extend the versatile player’s contract until 2023. However, Valencia prefer to sit down and negotiate a five-year deal after he turns 18.

Musah holds a British passport, which is why AS fears he could be a ‘safe target’ for the Premier League clubs.

Valencia, meanwhile, are looking forward to securing his long-term future after this weekend, and it was put in motion the same day he decided to leave Arsenal.