Denis Suárez didn’t enjoy his loan spell at Arsenal and played less than 100 minutes across six appearances in the Premier League and Europa League.

His time with the Gunners wasn’t his first spell in England as he spent two years at Manchester City between 2011 and 2013.

The Premier League winners signed him from Celta Vigo, but his appearances were restricted to cup competitions during his time at the Etihad.

Earlier this summer, the midfielder left Barcelona and returned to Celta, where he’s featuring regularly for the club. Spanish newspaper AS spoke to the player and asked him to explain as why he left the Vigo club in 2011.

He said: “My first decision was to stay here in the first team, but Celta did not contemplate that option.

Though the then teenager didn’t feature regularly for City, he did enjoy his first year in England.

“Life was a little different, it cost my parents more because they didn’t speak English and they had trouble learning it. 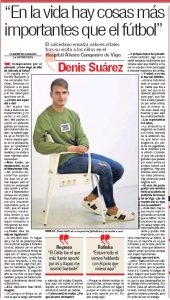 “The second year was a little long, also because I had been injured, and finally I decided to go to Barcelona.”

When questioned if it was an easy decision to leave Manchester City for Barcelona, the player said: “Yes, because Barça is a club to which I have admiration and there was also Eusebio [Sacristán], who took me with the first team in training and was friendly towards youngsters.”