With the English media linking Benfica defender Ruben Dias to Wolverhampton Wanderers, there’s of course a quick response from the Portuguese press today.

Newspaper Record brings a story about the situation. They don’t seem to know anything about the approach, since all they do is to credit the Express & Star.

Still, Record adds a little information which Wolves fan should be aware of. Firstly, Dias is protected by a €66m release clause.

And even if Wolves are looking for a discount, that doesn’t sound very likely. Because Benfica’s intention is actually to raise this release clause to over €100m. 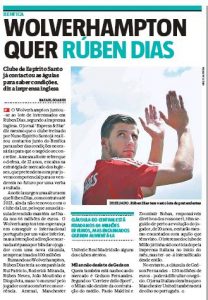 Secondly, there’s some heavy competition for the defender. Record lists Arsenal, Manchester United and Real Madrid as the other clubs interested in the player.

After selling João Félix to Atletico Madrid, it’s safe to say that Benfica now have Ruben Dias as their young star. So it will take some big effort to take him from the Eagles this summer.