It looks like Atletico Madrid’s amazing transfer window could get even greater, and it all depends on a new move from them.

That’s because according to Spanish newspaper AS today, the Colchoneros have been given the chance to sign Christian Eriksen from Tottenham Hotspur.

The outlet claims that an ‘authorised emissary’ from Spurs has met Miguel Ángel Gil to offer the Dane midifielder to the La Liga side.

It’s said that the price demanded would be between €60m and €70m, which AS calls ‘high demands’ made by the Premier League club. 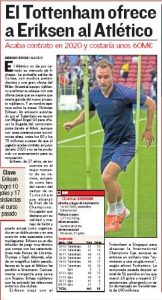 AS spends the rest of the story talking about the positions where Eriksen can play, his set piece skills and his form at Tottenham, saying he’s been at his peak.

However, there’s still no updates on Atletico Madrid’s response to the offer. It’s just claimed that they could be selling Angel Correa this summer, and that would be a good excuse for them to go after a new midfielder.

There’s been similar claims repeatedly made about Eriksen being offered to Real Madrid, so there’s perhaps something in this.