The first story you can find in Record this Tuesday is about Benfica’s wish to hold Ruben Dias in their squad for the coming season.

It’s claimed that after losing João Félix to Atlético Madrid, club president Luís Felipe Vieira doesn’t want other stars to go, so the defender should only leave in case his release clause is triggered.

A few clubs are mentioned as potential threats to land Dias, and the first of them is Wolverhampton Wanderers.

It’s claimed Nuno Espírito Santo’s side have been the latest to make contact for the defender, asking about the conditions of a possible deal. 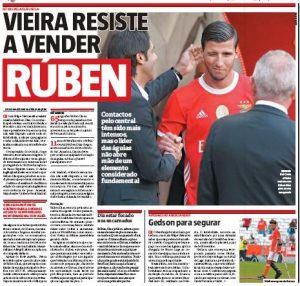 Besides Wolves, the likes of Arsenal, Manchester United and Real Madrid are named as well. Juventus were supposed to be interested, but the change of managers has now made their plans different.

Ruben Dias is currently protected by a €66m release clause. Benfica reportedly believe the big clubs can afford that, and that’s why there are talks so the amount can be raised to €88m.